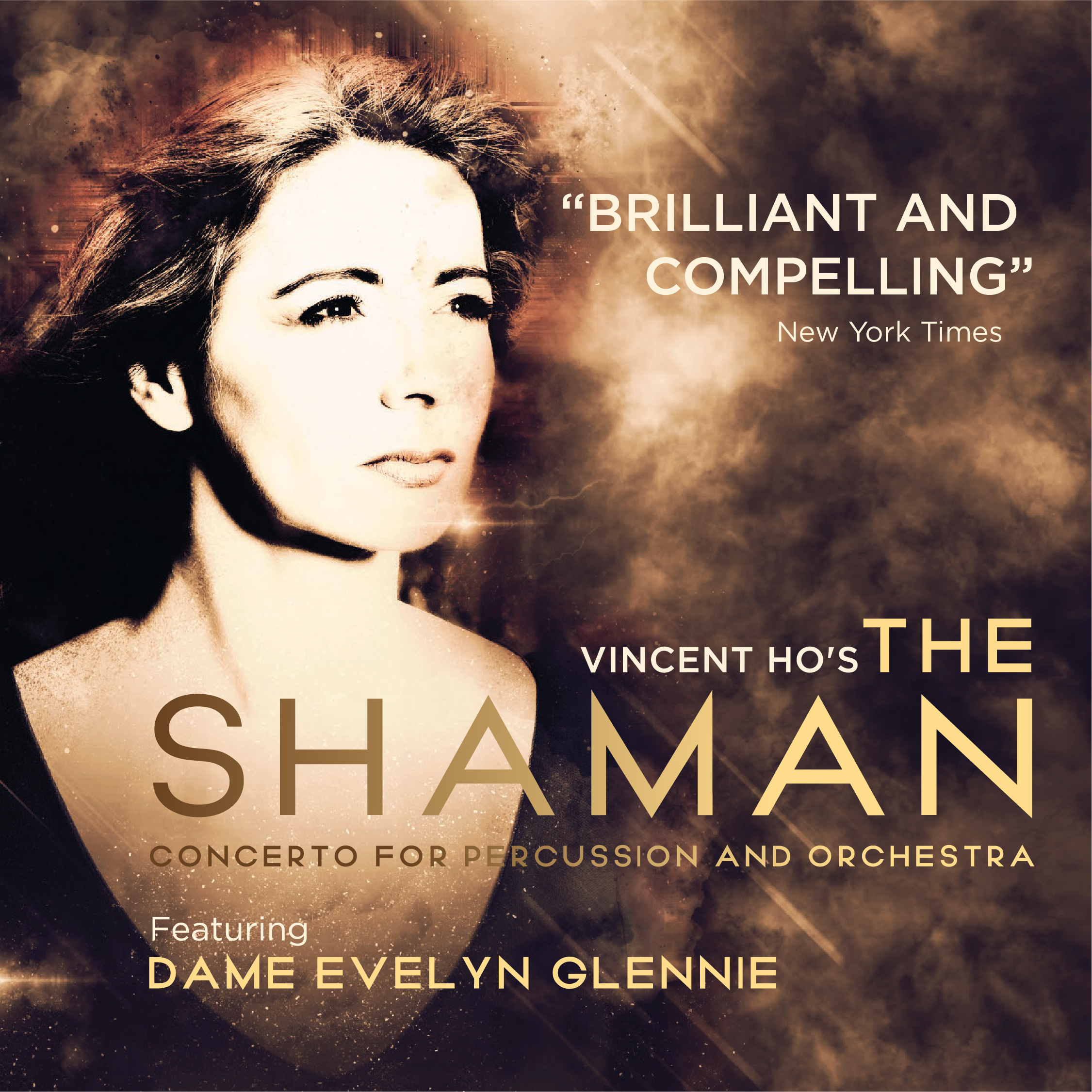 “I heard the World Premiere of Shaman, and was blown away by it. The work is masterfully written, with gorgeously complex sections contrasting with simple and elegant statements. I love the piece.” – John Corigliano (Oscar-, Grammy-, and Pulitzer Prize-winning composer)

“Who better to deliver a challenging new work than the unique Dame Evelyn Glennie…Her sharp focus on the music never fails to spark a similar rapt response in the audience…[The Shaman] has a driven trajectory with jazzy rhythms and cross-rhythms, and contains an energetic cadenza. It rushes to an exciting and abrupt ending – and a totally wild audience response.”  – ConcertoNet.com – The Shaman review

“It was she (Dame Evelyn Glennie) who carried the orchestra and surfed its wave. In this case, the TSO was but a dance partner. The evening of Shamanism it was: the Roy Thomson Hall was already packed with humans when all the spirits happily showed up for duty.” – Definitely the Opera – The Shaman review

“The piece was built in four movements and its ritualistic edge was aided by Glennie’s force-of-nature skills, along with the WSO’s faultless and exquisite underlay. Ho’s work is entrancing and hypnotic even when the music builds to one of its many crashing crescendos.” – Winnipeg Free Press – The Shaman review

“The percussion soloist is the shaman and itʼs hard to imagine anyone being able to conjure more musical magic on stage than Dame Evelyn Glennie. She moves with an arresting combination of force and grace and plays with a precision that puts many a hearing person to shame (Glennie is deaf and plays barefoot to better feel the musical pulse)…The soloist gets a lot of freedom and, best of all, the orchestra accompanies with an uncommonly colourful score.” – Toronto Star – The Shaman review

Globe and Mail – The Shaman article

The Shaman: Concerto for Percussion and Orchestra:

I have always been fascinated with the concept of shamanism. Practitioners of this tradition are known as “shamans,” and they are believed to be the intermediaries between the human and spirit world. They treat physical ailments by mending the person’s soul while connecting them to supernatural realms (by way of incantations, dance, music, and other methods). Being Chinese myself, I have learned of their historical roles and significance in Asian cultures and their continued existence in modern day forms (eg. China, Japan, Korea, Southeast Asia, etc).

This is also how I see Dame Evelyn Glennie, one of the world’s greatest percussionists. Throughout my years of attending her concerts, I always felt that her performances were more than just visual or aural experiences – they were “spiritual” events. She has the uncanny ability to draw the audience into a magical world and take us on wondrous journeys that are beyond material existence. Every performance she delivers leaves the audience spellbound and spiritually nourished. As well, being that she is from Scotland, I had learned that Scottish traditions have an emphasis on the belief in the supernatural. The Otherworld or spirit world is important to the creation of their literary and oral histories. They hold strong connections with the belief of banshees, sorcerers, and, of course, shamans. Thus, this theme was a natural fit for our collaboration.

The first movement, “Ritual,” showcases the soloist’s “shamanistic” abilities. It opens with otherworldly sounds (from the orchestra) that evoke the spirit world while the soloist makes her ceremonial entrance. As she “casts her spell” on the audience, the music becomes increasingly active, leading to a primal dance that harkens the ancient rituals of tribal celebrations and our modern day equivalents (ie. raves, discothèques, dance halls, etc).

The second movement is in two parts. The first, “Fantasia,” is a musical impromptu for solo marimba that captures the spontaneity of a free-form improvisation. The second part, “Nostalgia,” was initially inspired by three things: a photo taken by Doug Barber of an old man looking out of a window during sunset, a painting by Luc Leestemaker titled Voyager #7, and an accompanying poem to the painting by the same artist titled “Voyager” (about an endearing childhood memory). These three works shared a nostalgic quality that warranted musical interpretation. However, in order for me to capture this emotion, I had to search through my own personal history to find the one memory that brought me the same bittersweet longing; a moment in my life that I have treasured and kept close to my heart. Once I had found it, I was brought back to that sacred emotional space and the music soon wrote itself.

The “Interlude,” subtitled “Conjuring the Spirits,” explores the expressive possibilities of metal instruments. Here, the soloist summons up the “spirits of the earth” (as conveyed by the orchestra) as they prepare for the explosive finale.

Back when I was a college student, I was highly influenced by the concept of “primitivism” that many composers and artists had embraced during the early part of the 20th century. A number of great works were created from this direction and many of them showcased new ways of writing for the orchestra and individual instruments (from Igor Stravinsky’s ballet The Rite of Spring to Béla Bartok’s piano work Allegro Barbaro). As I was writing the last movement, I could not help but think of this period in music history. I went through many representative works and found two pieces that resonated with me: Stravinsky’s “Infernal Dance” (from his ballet score L’Oiseau de feu) and Manuel de Falla’s Fire Dance. Thus, I was inspired to compose a “Fire Dance” of my own that would capture the same degree of unbridled energy that these composers (and many others) have achieved in their own music. As well, this was the perfect opportunity to unleash my “inner inferno” (something that I have always wanted to do). 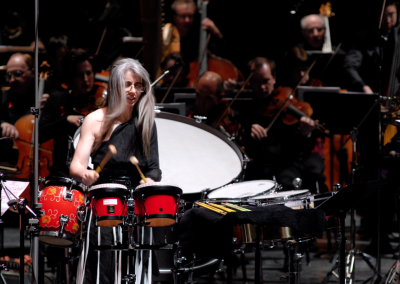 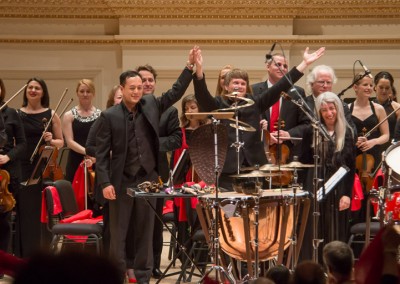 The Winnipeg Symphony Orchestra. 8 May, 2014. Photo by Keith Levitt. 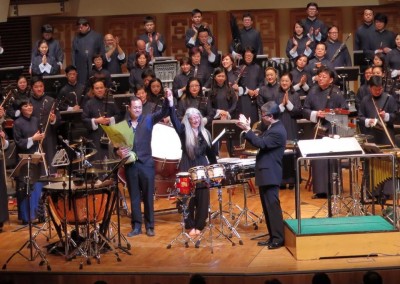 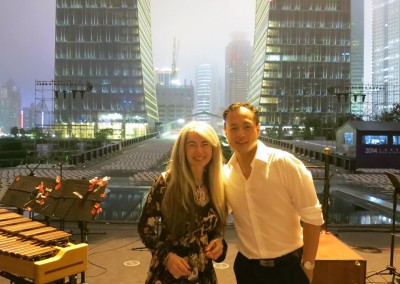 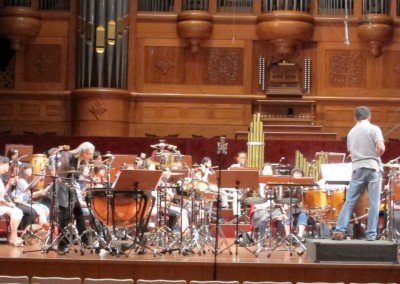 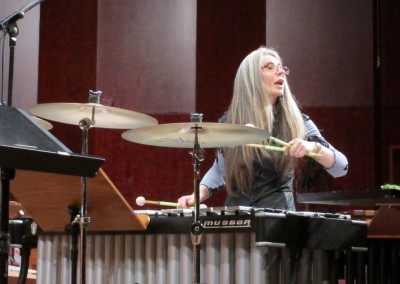 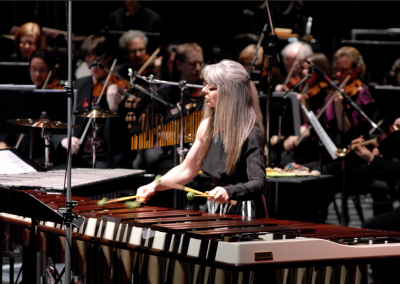 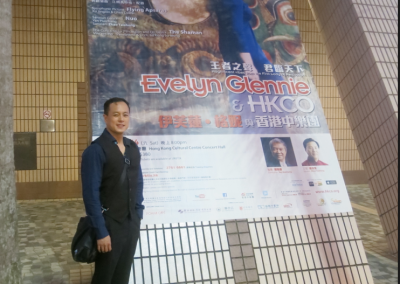