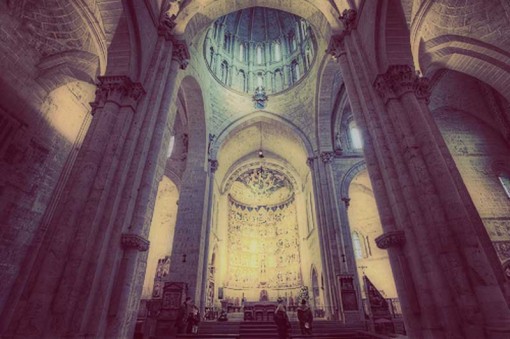 Remnants of a Glass Cathedral:

This work was inspired by Ken Follett’s historical novel, THE PILLARS OF THE EARTH. The book was the culmination of Mr. Follett’s lifelong fascination with Gothic cathedrals and the era they were built in. For me, his vivid depiction of the period and the characters captured a level of believability that is rare in novels, making the whole era richly alive to the modern reader. From this came the inspiration for my piece: a musical work that would conjure up church music of the past (Gregorian chants to be exact) but conveyed within the context of our time. In a way, I wanted to take the audience on a journey to the medieval church world and experience it from a modern perspective. In some sense, the work represents my attempt to “visit” a distant period while keeping one foot in the present time.

The work starts out with the strings performing the primary musical material in a highly expressive fantasia-like manner. Gradually, other instruments join in to expand the coloristic palette. As the music coalesces, a chant-like theme emerges. It is set against a kinetic version of the initial musical material, thus bringing the two worlds together in counterpoint. The work unfolds with these two entities vying for supremacy until the primary material overpowers everything else and makes its effort to bring the audience back home.