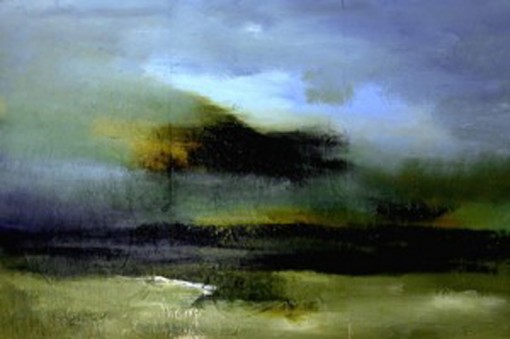 2005 Commissioned by The Canada Council for the Arts for The ARC Ensemble (Artists of the Royal Conservatory). The work was premiered in Beijing, China, by The ARC Ensemble, April 2006.

“Inspired by Dutch-American painter Luc Leestemaker’s (in attendance) abstract landscape paintings, Ho creates his own sonic tapestry for the series of images projected onto a large onstage screen. The four short movements — each introduced briefly by the artist – are distinctly different but still wholly Ho. The gifted young composer (who surely must be forming his own fan club by now) continues to reveal his keen ear for dramatic gesture and always tasteful orchestration, performed by a top-notch ensemble: WSO String Quintet as well as Jenny Lin (piano).” – The Winnipeg Free Press – Four Paintings review

I first came across Luc Leestemaker’s works in 2002 while visiting my girlfriend in Edmonton, Alberta. While walking around the university area, we went into a framing store that sold prints of various paintings. One series of prints that had caught my eye were by Luc Leestemaker. With his name written on the store’s business card, I left with the intention of exploring more of Luc’s works. Unfortunately, I never had the opportunity to pursue it until much later on.

In the fall of 2005, when I had completed my doctoral studies and was living in Los Angeles, I was commissioned to write a work for the ARC Ensemble (Artists of the Royal Conservatory of Music) for their 2006 tour in China. Now with more time on my hands, I decided to finally take a look into Luc Leestemaker’s works. To my delight, I discovered he was living in the Los Angeles area as well. I quickly gave him a call to inform him of my interest in composing a work inspired by his paintings. He was very enthusiastic about the idea and wanted meet to discuss it further. During our meeting I was introduced to more of his works and got to know him as an artist and as a person. I left his home with 3 books and a CD compilation of his entire collection of paintings.

During the week that followed, I poured over his hundreds of paintings and found four that struck me in a musical way. Each of them warranted differing musical interpretations.

I. The first painting struck me as an ideal candidate for the first movement: colorfully animated, immediately striking, and very inviting. It looked as if it was created in one grand gesture, capturing a sudden moment of inspiration. For the music, I wanted to convey the same sentiment – having it immediately unfold in one breath and in a colorfully animated language. The musical textures echo the visual textures of the painting (active background with a distinct foreground). 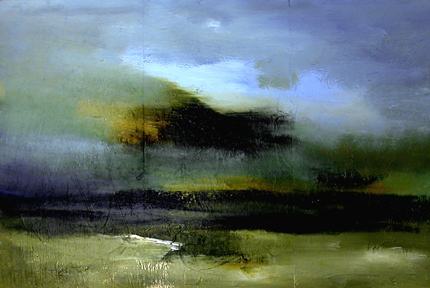 II. The second painting had a rather somber tone, almost severe. Its unsettling quality felt as if it emerged from a deep subconscious realm. The music conveys the same character. It begins very hazily with the piano drifting in and out with ambiguous harmonies. During which the strings gradually coalesce into a unified entity. The music builds with great intensity until it finally unleashes in one big kinetic release. As the dust settles, the music returns to the hazy, ambiguous character it began with and drifts away into oblivion 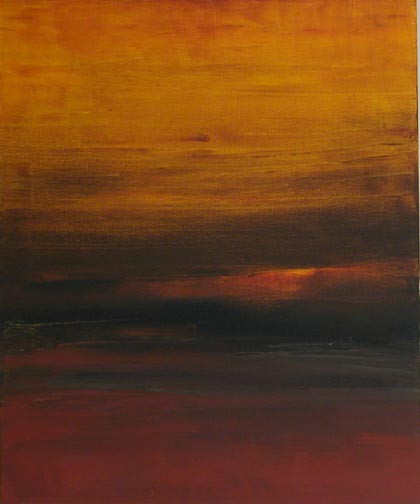 III. I found the third painting to be very spiritual and reflective, almost “Zen” in character. For this movement, I decided to make the musical language as simple as possible in order to capture the painting’s essence. 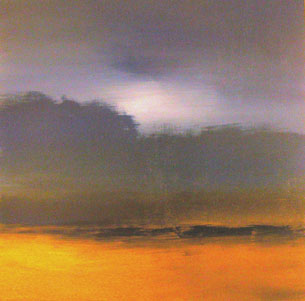 IV. The last painting, titled Birdsong No. 9, had a youthful optimism to it that is full of energetic lyricism colored by tastefully seasoned dissonances. To me, I saw the summation of one journey and the re-awakening of an inner-child – like the end of one phase and the re-embracement of long-lost one. As well, there is a folkloric quality that adds to its rustic character. For the music, I responded in a similar vein. The piece is fast and energetic, built on Chinese folk rhythms and sonorities, and seasoned with delicious dissonances. It expresses a youthful energetic quality that harkens an earlier period of mine; a period when I still viewed music with a child-like sense of wonder and excitement. 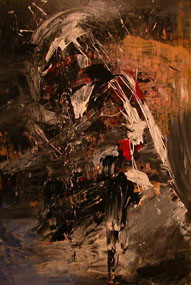