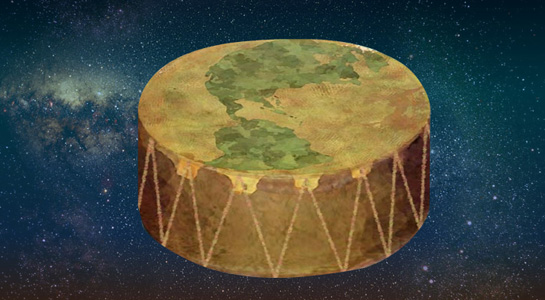 Earthbeat was written as the last movement of the “True North: Symphonic Ballet”, commissioned by the Calgary Philharmonic Orchestra to celebrate Canada’s 150th Anniversary. The work was inspired by the pow-wow traditions of Canada’s First Nations community. Much thanks to pow-wow musician and expert Hal Eagletail of the Tsuu T’ina Nation, I was introduced to the music of his community, its history, and the cultural importance it serves. It is through such collective dances and music-making that brings one closer to the Earth’s “heartbeat” while bringing unity within the community. From my discussions with Hal, I learned that this “heartbeat” is a universal theme found in all civilizations, and for me as a composer I should find a way to express it within my own musical language.

To reflect Canada’s history and the people of the Indigenous, Hal and I decided that the inclusion of the Métis traditional piece “Red River Jig” during the climax of this work was an important way of acknowledging the nation’s history in musical form. It is a piece that has its origins from the traditional dances of the First Nations, French, English, Scots, and Orcadian people.

I humbly thank Hal Eagletail and all of the pow-wow musicians I met and learned from during the creation of this work, and to choreographer Yukichi Hattori whose original narrative of the “True North Project” provided the initial inspiration.